As a Microsoft Partner we get early access to new releases, in this case the new Windows 10 operating system. More importantly to us though was getting access to the new Web browser (as a Web designer we want to make sure the websites we build work seamlessly across all popular Web browsers), code name Spartan, release name Edge. I know... confusing with both an internal Microsoft code name and then a release name but such is the life of pre-release software. I installed Windows 10 in a virtual machine on a Server 2012 Hyper-V host and was running it in a Remote Desktop Connection so I can't comment on performance and speed of things due to my environment (that and Microsoft terms and conditions forbid benchmarking!). What I am able to review though is the interface and a cool new "Make a Web Note" annotation feature.

It's pretty obvious to guess where the name Edge came from as the browser "goes all the way to the edge" when viewing Web pages. The horizontal and vertical scroll bars disappear when they aren't needed. While on a high res desktop monitor this may not be a big deal, on tablets or smartphones this will be a definite plus. Comparing how our own Phoenix Website design rendered vs Chrome and Firefox, the only obvious change was the underlining of the hyperlink for the phone number. Just out of curiosity I clicked on the link and up popped a "People app" where I assumed I could associate that phone number with one of my contacts. Other than that underline, the site looked the same. Type or the text on the page, seemed extra sharp to me. I'm not sure if that was due to my Remote Desktop Connection viewing method or if they've done something to the font rendering. 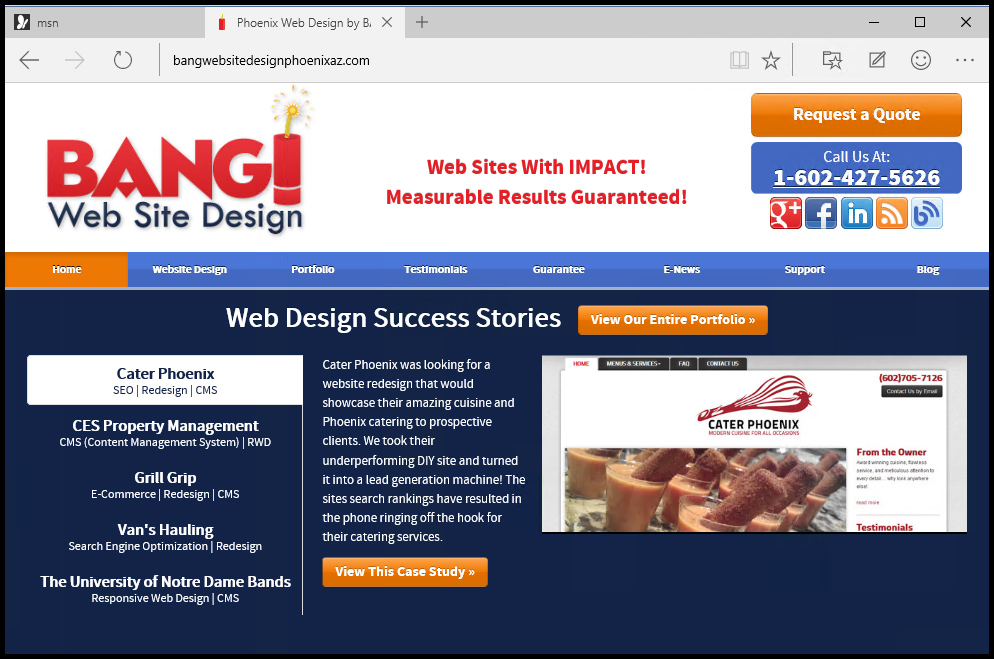 The "Make a Web Note" annotation feature is a nice addition as normally this would require a plug in of some kind for the browser. You can choose from highlight tools (see the Web Site Design with the Yellow behind it), drawing tools (the circle around our Web Sites With IMPACT! Measurable Results Guaranteed! slogan) and you can type a text note on the screen as well. During a website design or redesign process, it's common for us to make some notes on the project and the ability to put it right on the page is great. 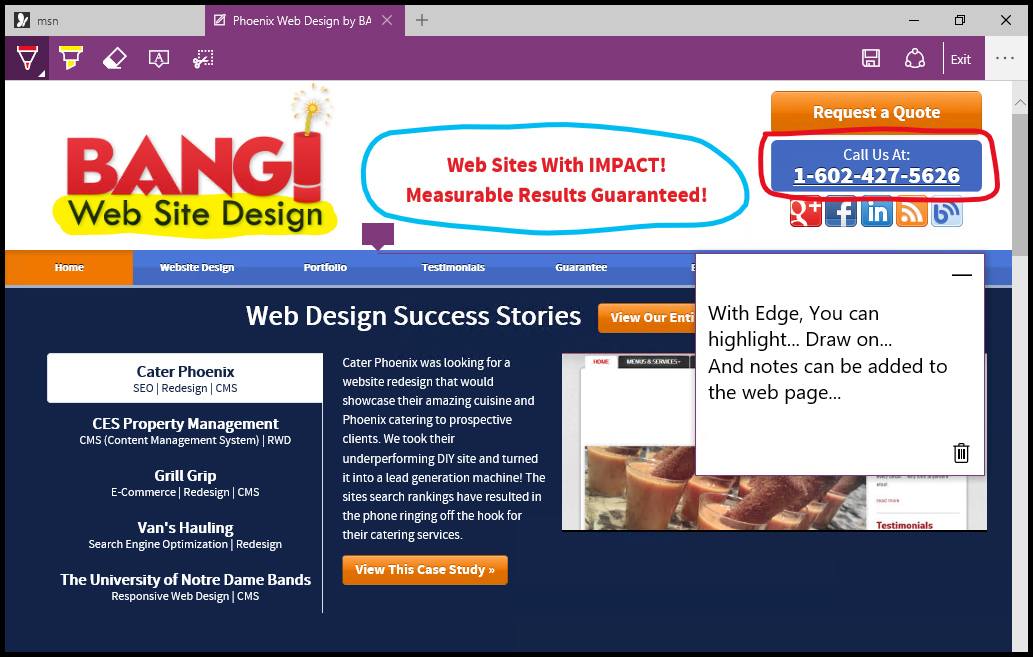 You can then save your Web Note as a favorite. 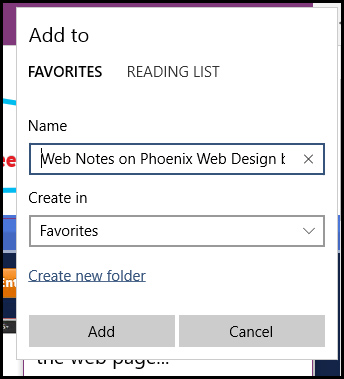 There's also a share function that apparently isn't quite complete yet...

The settings revealed another new feature, the ability to turn Adobe Flash Player on or off. While I love and use much of Adobe's software, the Flash Player is a bit of a resource hog, a frequent security vulnerability, and I'm fine with just turning it off. Thanks Microsoft for an easy way to do so. Note the Project Spartan About dialog. 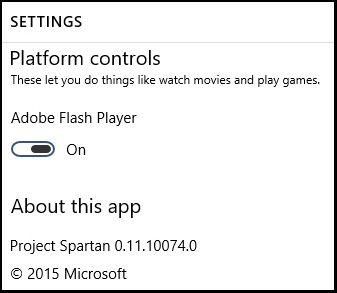 The search settings aren't quite ready either as the only search engine available was bing (Imagine that!).

One important item to share is Microsoft is getting away from proprietary browser functions like Active-X controls. Edge is built using industry standards so moving forward it should be easier for Web developers like us to build a site that just works across all browsers. A word of warning though, in the past many have built sites and especially intranet sites that were built for IE (Internet Explorer) only. Those designers are going to be in for a rude awakening as Edge won't support those legacy functions. Since BANG! has always built our clients websites using industry standards, we don't anticipate any issues with the rollout of Edge with Windows 10. Kudos to Microsoft for embracing standards.

Just in case your curious what the Windows 10 desktop looks like, here's a screen shot of it (and please note the images are higher res than what shows here, feel free to right click and view in a new tab to see the full resolution version). 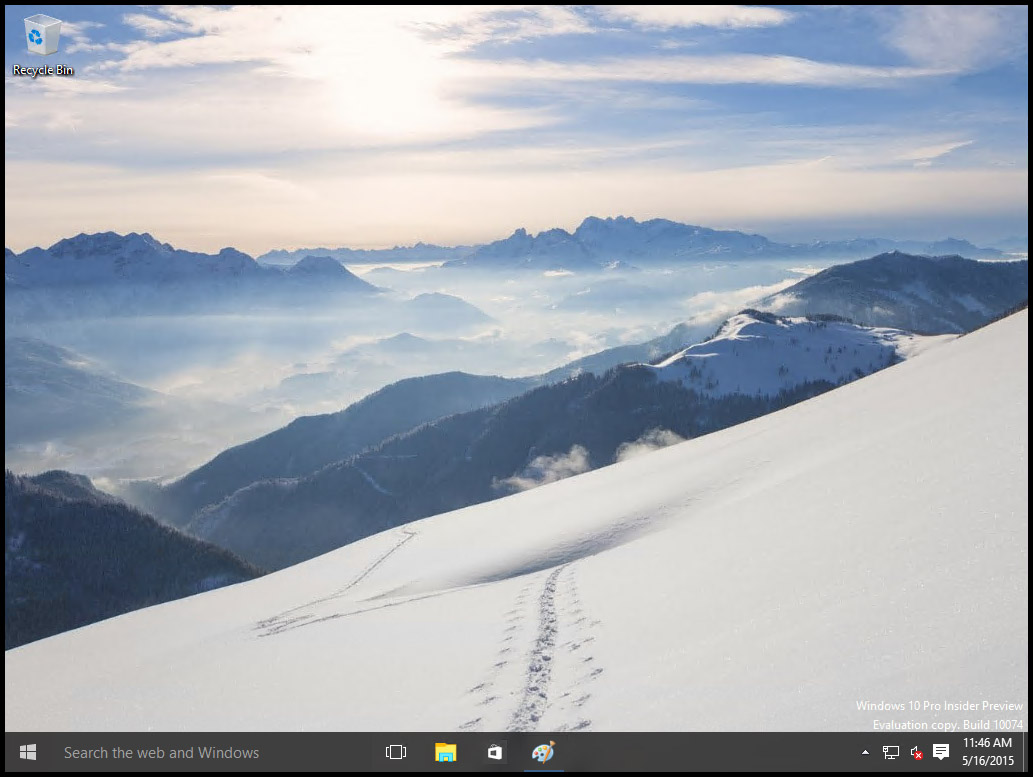 If you fire up Internet Explorer 11 (yes it's still there at this point), you'll get a nice introduction and suggestion to try out the Microsoft Edge Browser, which is currently Code Named Project Spartan... (no that's not confusing at all...). 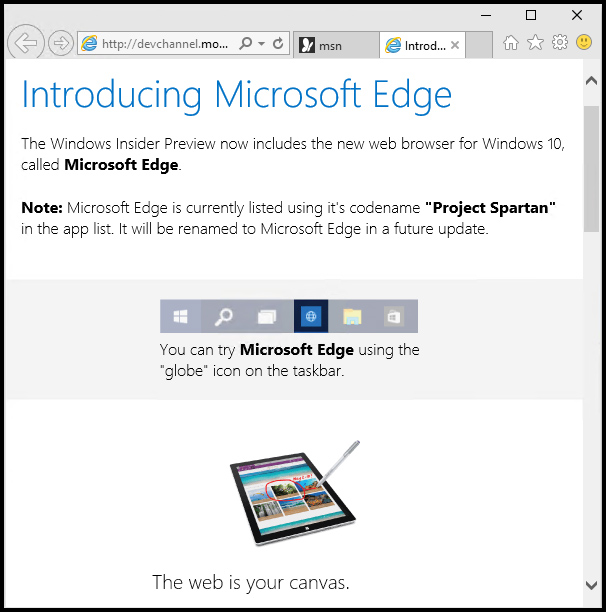 And I'll leave you with what may be the most widely requested function for Windows 10... the Start Menu is BACK! :-)

I hope you've enjoyed this quick review. If you'd like your website rendered in the Edge browser just give me a shout and I will send you a screen shot of it back to you. FYI, there's not been an official release date announced yet for Windows 10, but it's expected yet this year. Some are speculating as early as July. We'll keep you posted as we learn more. Thanks for reading the blog of your favorite website design firm!

If you are the owner of a small business with limited resources, it makes perfect sense to take advantage of all the free SEO tools you can get your hands on.

Here's 9 that will help you rank.

Web Design Trends You Need to Know About: 2022 Edition

We understand that web design can be tricky sometimes, and keeping up with trending styles can sometimes feel overwhelming.

SEO Writing and Creativity: How to Capture Your Audience With Engaging SEO Optimized Pages

By writing how your customers search, your position in Google's search results improves.