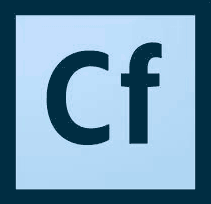 As an active ColdFusion Developer since 1998 (when it was still owned by Allaire, prior to being purchased by Macromedia and then Adobe) we laugh every time we hear "ColdFusion is Dead". We've used it non-stop for over two decades while other popular programming languages have come and gone.

In the early days of the Internet, if you were looking to connect a website with a database to either retrieve or publish data, ColdFusion was (and still is) a great solution, perfect for such business applications. ColdFusion acts like a bridge between a web server and a database (that's a very simplistic viewpoint as it does so much more).

ColdFusion may be one of the easiest web programming languages to learn because it uses a very familiar approach that anyone using HTML will find easy to pickup.

CFM / CFML / .cfm / ColdFusion Markup Language's syntax is very easily integrated within an HTML page and learning the tag syntax is quite simple for most people. Want to send an email from a webpage? Use the cfmail tag. Want to get data from a database? Use cfquery. Want to insert data into a database? Use cfinsert. It takes very few pieces of code to produce huge results. When paying an expert web developer over $100+ dollars per hour, don't you want them working in an environment that produces results quickly?

Want to go deeper and perform more complex programming? ColdFusion is a Java programming language that allows advanced programmers to tap into their java skills to do even more.

We think so, anyway you want to read that statement (rad is slang for very appealing). RAD in this instance stands for Rapid Application Development meaning it's very easy to learn, work with, and quickly get web applications built. ColdFusion programming language, which some call a scripting language while others have called it a tag based approach, excels at building a wide range of applications for medium-sized businesses and many Government organizations still use it today.

ColdFusion was a pioneer in allowing a web page, hosted on a website server, to not only provide database access to populate a page from a content database, but also to store data from a web form into a wide range of database formats including Microsoft Access, Microsoft SQL Server, MySql, and any other database that can be reached through a JDBC driver (Java DataBase Connectivity). This is why BANG! first started using ColdFusion. We wanted client's to not only have a website, but to be able to update that website themselves using a CMS (Content Management System) we built using CFML (ColdFusion Markup Language).

These early web pages were said to be dynamic as they could be easily changed without having to know programming skills. Dynamic ColdFusion at it's best.

One of our first important web applications allowed a local car dealer to populate their website with the inventory of vehicles on the lot. A secure login allowed them to enter vehicle data into fields, write a short description and then post photos of the vehicle. This is typical of such business applications we've used ColdFusion, and now Lucee for, using rapid application development to build countless custom applications to meet a business need. 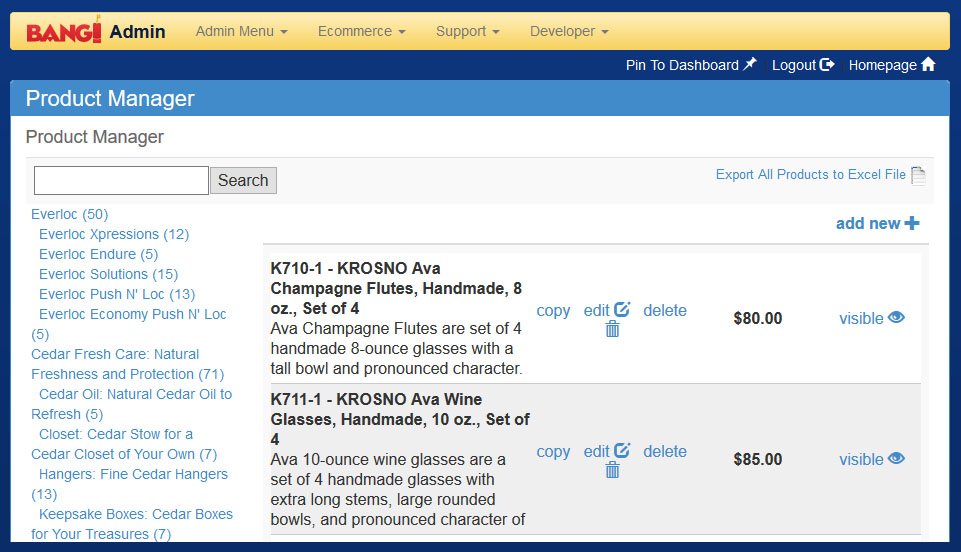 E-news system allowing newsletters to be composed and sent to a list of email addresses stored in a SQL database. 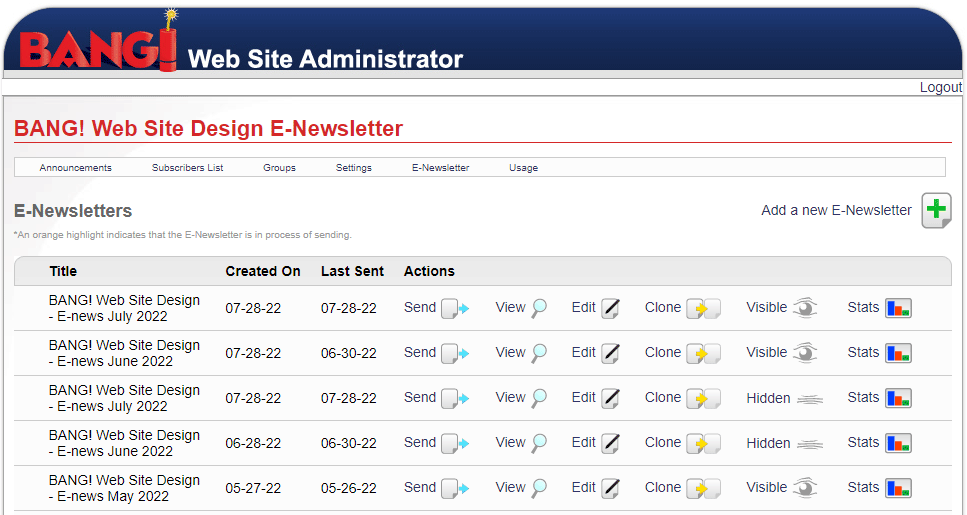 A recent performance of various Internet technologies developed by Ortus Solutions shows Lucee being one of the faster web platforms, 2nd only to Go. In this testing it was twice as fast as node.js, and rails, 2.5 times faster than Laravel (a .php framework) and 5 times faster than django. Since for our SEO services, speed is important, and who wants a slow website anyway, we are pleased that are use of ColdFusion benefits us there as well.

Despite being one of the older advanced web technologies it has not stood still and now offers lots of new features and is a complete platform (at least in our history has written the book) for web development.

Mobile applications can also be built with Adobe ColdFusion and in fact, we use it to produce our responsive web design and progressive web apps.

I pulled this information from the ColdFusion Wikipedia Page

Released November 1999 - Extended ColdFusion's ability to connect to external system resources, and introduced COM and CFX's. Debugging was improved and the ability to remove whitespace created by .cfml code in the document, but not written to the page.

Released June 2002 - This was the last of the annual releases. Key changes and additions included ColdFusion Server being rewritten using Java making it extremely portable and allowing it to run on multiple operating systems that supported a Java Runtime Environment. Integration with Macromedia Flash and introduced Flash Remoting.

(the most recent release of ColdFusion at the time of this writing) Released November 2020 - Key features added or improved included a lightweight installer, a ColdFusion Package Manager, cloud storage services, messaging services, support for No-SQL database, SSO (Single Sign On), and improvements to the performance monitoring toolset as well as core language enhancements.

TeraTech has a great list of new features in 2021 and future features available here https://teratech.com/adobe-coldfusion-2021

One of the several open source software versions using the CFML programming language. Railo began in 2002 as a student project when they tried to compile CFML code into PHP, but which failed to provide the desired performance and stability. They then switched to the Java platform instead. The official release of Railo 1.0 occurred in April of 2006. Version 3.1, released August of 2009, was the first open source version of Railo. May 2012 The Railo Company Ltd was announced. Releases of multiple versions up to the final release of 4.2 in December of 2018. Railo 5.0 was tweeted on May 28th 2014 but was never released. The GetRailo.org website has a security certificate that expired in 2022 and now hosts what appears to be an unrelated website.

A fork of the Railo project, was rumored to have come about when Railo staff became disgruntled with the direction the project was taking. Lucee 4.5 was the first release and at the time of this blog post (7/29/22) 5.3.9.141 is the most recently released version. A 5.3.10.x version is planned as a LTSC (Long Term Servicing Channel) with bug and security fixes planned for at least the next couple of years.

Lucee runs on Apache Tomcat in it's default deployment on the Windows platform.

Plans for Version 6 of Lucee were announced in November of 2018 at CFCAMP2018. With the first Beta release expected soon (August 2022?)

Some of the plans for the version include...

One of the reasons ColdFusion wasn't used more by developers in Internet technologies was the cost. From Allaire through Adobe, it's always been a paid product and the enterprise version has always been rather expensive, especially when alternatives such as .php have been free.

Lucee has successfully created a free version of ColdFusion that's open source and allows anyone to download, install and run on production servers. BANG! has been using Lucee since version 4.5 and we've been very happy with the results. Lots of ColdFusion developers have joined us in migrating to Lucee.

One of the notable users of Lucee is NASA. So hey, if it's good enough for the organization in charge of "rocket science", then hey, it's probably good enough for you right?

If you are looking for an established ColdfFusion development company in the United States (we are headquartered in Phoenix, AZ) why not give BANG! a try? We should certainly be on your top list of ColdFusion development companies. If you have questions about our projects, or would like to benefit from our 26 years of experience, contact us or schedule a consulting session to discuss our development process and discussion of technologies with a manager of application development expert.


Brian Rideout, Chief Pixel Pusher of BANG! Web Site Design is an industry veteran (sounds better than old guy right?) who started building websites in 1996 when dial-up, modems, Netscape and 640 x 480 resolution monitors with 256 colors were state of the art. We very quickly adopted ColdFusion as our application server and developed CMS (Content Management Systems) powered sites for our clients so they could update their own websites easily without having to pay a web designer to do so.

We stumbled into SEO by "accident" when we got a client ranked #2 on Yahoo (remember this was the 90's) for an extremely competitive keyword phrase and they sold out of all the product they had. With a little reverse engineering we learned what Yahoo was looking for and applied our new found SEO experience to other clients and then to Google... which was a tougher nut to crack by the way.

Times changed, Google became the dominant search engine, Adobe bought ColdFusion and we switched to Lucee for our application server which is an open source CFML language server, and we continued to build websites for small business's in the Phoenix market. Brian's approach of SEO 1st Design has resulted in many businesses, particularly in the building trades such as contractors and plumbers, as well as law firms, to rank at the top of Google's results which keeps our customers happy, healthy, and profitable (you thought I was going to say wise didn't you?).

We continue to provide website design, website development, hosting, SEO services and digital marketing for Phoenix companies. More information about the company can be found on our About Us page. Click the following link for examples of our award winning website design work.

As an RV Dealer, you may be curious if SEO can increase your visibility in Google's search results and drive traffic to your website.

The answer is yes, it can, as this case study shows us taking a dealership from not found to page one.

Effective SEO will help bring prospects searching for your product or service to your company's website.

Questions To Ask When Hiring A Web Designer

A list of questions to ask a web designer before hiring them. Because asking the right questions of a potential web designer or web design company BEFORE you hire them can save you a lot of frustration and headaches in the months and years to come.